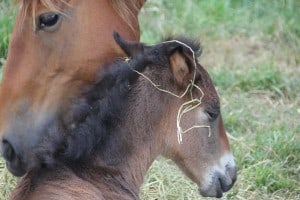 Brumby mare and foal, January 2012, in our house paddock.

It’s late here at A Place of Peace, the rain falls gently, and when we step outside, we’re greeted by the gentle knicker of a wild mother mare who recognises us as “The Ones Who Bring Food”.   It’s time for their last meal of the day, and the garden has been turned into a nursery for three mother mares and their little filly foals.  The house yard is quite large, and they go under the pine trees and the Hawthorn Tree, the little ones racing around with their tiny tails stuck high in the air.   They are so beautiful, and growing up in complete security, knowing that if they can’t find mum, aunty is close by.  The mares are great mums, and very proud of their babies.  I shudder when I think these foals may never have been born, and their terrified mothers, killed horrifically in slaughter houses which should be shut down forever.

During the day the wild horses graze peacefully in three herds.  Merlin the stallion has his herd which includes the baby colts Emrys and Arthur.   Three grown up colts have their own herd and the girls with baby girls are in by the house.  They are all close by and have the security of seeing each other across the fence. 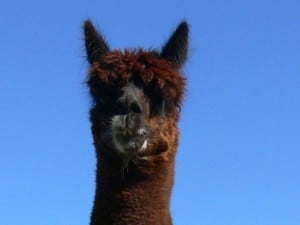 Sadly, we said goodbye to our beloved alpaca Zeeka recently, who pined after his mate Benji who passed last year in October. It is the end of an era here, with no alpacas standing guard over with the goat herd and Sarah the sheep – and to be honest I’m still not quite used to it.

As we were burying Zeeka, I heard the familiar sound of a wild goat mum who had lost her kids. Tamsin and I took the dogs, rushed over and found, thanks to the dogs, two babies left behind. My dogs are untrained kelpies, and yet they know when there is work to do. I asked them to “find” and “hold” and they did – gently, calmly, explaining to the kid that they were friends with thoughts and demeanour, so that I could pick up the baby and take them home.

If we don’t take them home, they are unlikely to survive the night.  We’ve been asked why the mothers leave them and it is for many reasons – sometimes they know the baby isn’t right.  Sometimes the babies fall asleep when the herd walks off.   Sometimes they want us to take care of them.  During the drought the word I heard from one mother as we collected her son, was “hay”. She knew her son would have a good life with us.  She knew he would have food. 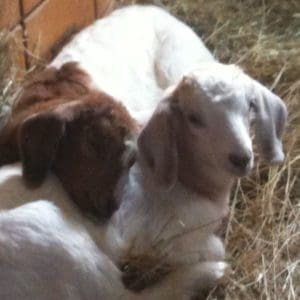 Like all goats we’ve hand -raised, we introduce them to the other goats and help them get over their shock with lots of cuddles and rescue remedy.  They all are brought up in the house first. Tamsin is the goat lady and the goats adore her.  This brother and sister are living in the kitchen currently, getting to know everyone and life in the human world (that’s them in the picture sitting on hay).

The brumbies have been interesting. I was shocked to find hoofprints down by the creek, and even across the creek. It started when we gave them  a paddock hay that was not to their taste. It was too much like dried grass. We bought 200 bales of it, after being donated some other lovely meadow hay, which the horses actually like, from one of my lovely students.

Merlin jumped the fence and wandered around the creek, telling me in no uncertain terms that if we couldn’t provide “decent” food, he would have to take his herd to find it himself. And I don’t blame him. The grass is drying and across the creek are lush paddocks full of good stuff, but thanks to the damage from a flash flood we had, there’s currently no water over there. I explained to him that we were working on getting the pipe  fixed and if he could be patient, we would move the herd to greener pastures.

He jumped back into the paddock and I mixed lucerne into the less tasty hay.

Every morning there are 10 brumbies in the paddock, waiting for breakfast, looking innocent.

The brumbies have broken a few fences, showing me they don’t have to stay here at all if they don’t want to. When the shearer came, the nursery herd were so frightened that even the babies leapt the fence, joined the big herd, and they all took off. I had to run after them, calming them down, calling them in, and promising them that no one was going to be killed. Apparently one of the shearers sent a predatory thought to them. It might have been a passing one – but they heard it and shared it with me.

The horses are on extra alert when strangers come.  Their eyes go from soft and curious to wary and guarded.  We might be considered part of the herd but other people are either alarming or to be tolerated.  It’s all about relationship, building trust, and keeping promises.

Speaking of horses we are delighted in the now cemented friendship of Samantha the Shetland and Totem the Goat.  Totem was our first baby we ever adopted from the wild goats, and he would travel in the car with the dogs on outings, as did Sarah the sheep when she arrived.  Totem and Samantha are very bonded and sleep in a stable together at night.  During a recent flash flood, we brought the ponies and Totem up to the high ground of the house.  Totem refused to shelter on the verandah ( and goats don’t really like rain).  Instead, he stood outside the office window with Sam in the pouring rain.

That was another exciting night that had been foretold by a kookaburra, so we were partially prepared.  There was lightning dancing all over the sky, and it was pouring inside and out.  Once all the horses had been moved to high ground ( and I was grateful I’d got in extra torches) , I began to experience a moment of concern for our ancient house.   But then I remembered, two little bush rats had run into the house in plain sight, through the front door!  I knew then the house was safe.  And I silently thanked them.

Billie Dean is an internationally recognised interspecies telepath, animal and peace advocate and award-winning creative artist.  She  is the author of Secret Animal Business, and  an independent filmmaker of inspiring and heart-warming films about animals and peace.  Billie runs a transformational on-line school Rainbow Fianna, teaching animal communication with ethics and an eclectic blend of native  and visionary wisdom to help people evolve into the human angels animals need them to be. With her husband and daughter, Billie runs A Place of Peace at her home, where over 40 rescued horses run free, and is the founder of The Billie Dean International Deep Peace Organisation, a not-for-profit organsiation to promote peace and freedom for all animals through the arts, education and compassionate action. billiedean.com

Copyright ©  Billie Dean, 2012.  You are welcome to share  this article but only in its complete form with author, author blurb, and website attached.  Thank you!