So many beautiful things are happening with our 14 new North Kossi brumbies.   The big blue stallion called Merlin has such a kind eye and intelligence, and we have bonded deeply already.  He has eaten out of my hands on more than one occasion.

After a short delay in moving to their new paddock (it required a further fencing fix), the horses explored it quietly.  A young colt we’ve called Star jumped the newly fixed fence with ease more than once to get to the grass on the other side.  But he jumped back in again with just as much ease when we asked him to.  He now understands “fence”, and also “feeding time”, and hasn’t bothered to jump it again. 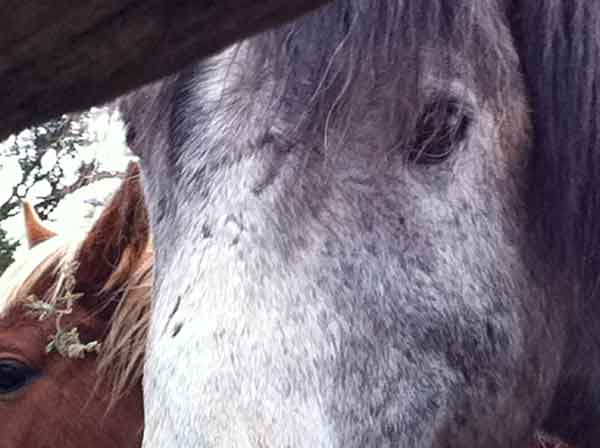 And they are – gentle and sensitive.  So we take our time and build trust with them.  We don’t bother rushing in and try to worm them or “handle them”.  We don’t do join up, as, contrary to popular belief, I don’t think it works with all wild horses.  It certainly didn’t work with our Finn, a brumby stallion we took in six years ago because he was frightened of becoming “dog meat” .  So we have developed our own approach by not being predators, and allowing them to come to us when they are ready.  It’s about building trust and confidence.

You can imagine my delight when young Star today nickered when he saw me.  I was carrying a bale of hay, but even so, it was a heart-warming moment.  I felt completely accepted by the herd as I wandered amongst them, either shovelling manure or spreading out hay , the dogs at my side and the sun shining.  Another colt, Sun, who reminds me of my own beloved horse Sollie, has started following me around and we too have had some lovely moments and magical exchanges.

The brumby herd are still being fed five bales of hay a day (and our thanks to everyone who has donated to support this).  Some meadow, some grassy lucerne.  They have had silver colloid, Himalayan salt  and Rescue Remedy in their drinking trough, have devoured a huge mineral lick, and discovered the open stable.  They have transformed from a group of bedraggled, frightened ponies to horses with shine on their coats and in their eyes.

They are recovering from their ordeal of capture and transport, and have gone from huddling together like footballers in a scrum to lying down in the sun, knowing they are completely safe.  They have stared in astonishment at the cows next door, and watched in amazement as the baby goats climb all over our Troopy.  Coming from the silent wild, they tell me we are “very noisy”.

On closer inspection, we have found two young colts so far, mothers with foals, mothers in foal, and a couple of orphans.  They are all so young that it makes me shudder to think of them being rounded up and stuck in an abattoir, cruelly slaughtered with the intelligence of knowing they are being killed – dying in fear.

I am so grateful they are here and we were able to save so many.

More horses are being trapped right now and if you can please help the effort, we and they would be incredibly grateful.   Please call Kim Hollingsworth on 0421 717 216 if you are interested in taking in a couple of brumbies of your own.  And if you want to help our effort (we’d really appreciate it!), you can make a donation or sponsor a pony.